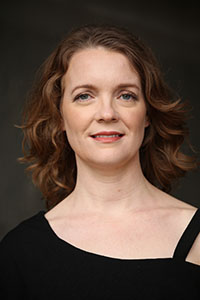 Amanda is a singer, a songwriter, and music teacher.  She grew up in New Mexico and first made her way to Colorado to attend the University of Northern Colorado where she earned her Bachelor’s in Music Education in voice.  While at UNC, a passion for jazz was ignited, and she went on to pursue a Masters in Jazz Voice from Roosevelt University.  Chicago greeted her with an array of wonderful opportunities within the rich choral community, the jazz scene, and many places in between.  After a few years she began writing original music, and formed her Americana band, Mandy and the Bandits. She and her band performed extensively throughout the region, and released two albums of original music. Amanda then picked up and moved to Los Angeles, where she continued singing, teaching, honing her songwriting chops, and picking up Old Time fiddle and a love of Dodgers baseball along the way.

Amanda has sung with the Grant Park Chorus, the Chicago Symphony Chorus, the New Mexico Symphony Chorus, and with various chamber ensembles such as Bella Voce.  She gratefully joined St. Martin’s in 2019. Amanda is so happy to have landed back in Colorado, where there is major-league baseball, glorious mountains and music all around.