Organist and good friend Tamara Schmiege died Friday. A graduate of Eastman, she held a variety of positions in (if memory serves — [sorry that this is off the cuff]) Texas and Colorado, most recently at Ascension Episcopal, Denver. She attended St. Andrew’s whenever she could, her membership technically being here, and she had subbed at the organ a few times for Ralph before Linda Mack became our principal deputy and guest organist. Her love of the music at this parish was a great compliment to me, and I was honored whenever she brought her exuberant smile through the door — often part way through the service, as she was coming from her own 10:00 service to what remained of our 11:00! At only 48, her death to cancer can be described as tragically premature. She served positions with the Association of Anglican Musicians over the last decade, and was beloved of many, many people, and will be greatly missed. 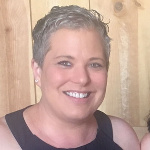 Her memorial service will be here at St. Andrew’s on Saturday, February 15, 11:00am. I have asked the choir of Ascension church to join us on several numbers that they know.
___________________
I was touched to received at least a dozen replies to my last Weekly, wherein I ignominiously whined about no one inquiring about my lack of Weeklys during January. I immediately regretted it — self-pitying and petulant is all I can say. My apologies for moaning and whinging (as the Brits say). Unbecoming of me.
___________________
I have little of any detail to add to last week’s description of our upcoming concert called “Shiru L’Adonai: Jewish Sacred Choral Music,” but would like to say how enamored I am becoming of the music as we’ve been rehearsing it. The Lewandowski pieces are of a beauty and inventiveness that certainly equals Mendelssohn’s best work, and are alone worth the price of admission (I want to record them some day!). I am also very impressed with the two pieces by Rossi that I have chosen, one being a very worthy rival to a Gabrielli polychoral work. The Sulzer pieces are brief but harmonically vivid, demonstrating a firm and inspired grasp of the a cappella sacred idiom of his day, and I look forward to familiarizing myself with more of his incredibly prolific output. And of the works from the 20th century (well, most of it 21st, actually), I have fallen in love with Jonathan Miller’s setting of Psalm 4 (dedicated to his friend Rollo Dillworth, a name many of you involved in American school music will know), and Joshua Jacobsen’s arrangement of “Mi Zeh Y’maleil,” as well as Coreen Duffy’s “Adon Olam.” Really, a treasury of choral riches from start to finish! I guarantee you’ll love this concert.

Here are the two performances:
Fri, Feb. 21, 7:30pm – St. Paul Community of Faith (Lutheran), 1600 Grant St., Denver
Sun., Feb. 23, 3:00pm – Temple Emanuel, 51 Grape St., Denver (Hilltop neighborhood)
Reserve tickets in advance by clicking here; or by calling the SMCC office at (303) 298-1970. Tickets also available at the door.
___________________
Evensong this week is the first Thursday of the month, so it features the full choir and organ. The actual commemorations of the day aren’t exactly household names (Roger Williams and Anne Hutchison — two 17th century New England colonials [he an Anglican priest, she a “dissenter”] who were absolutely key to establishing the religious freedom that became a hallmark of the U. S. Constitution a century later). Here’s the music:

Since we’re commemorating New England American colonials, I thought I’d produce a few New England composers for this service (although I have found that I was wrong in one case). Charles Callahan is indeed a New England composer, and his Evening Service for Harvard has all the New England credentials one could want. David Drinkell served most recently at the cathedral in Fredericton, New Brunswick, which is a bit of honorary New England (he died quite unexpectedly in October of last year at the age of 63; he previously served cathedrals in Orkney, Belfast, and Newfoundland). And here’s the embarrassing one: I had thought for some reason that James Kent was a New England colonial, a la William Billings, only to find when googling him today that he was actually at Winchester Cathedral for most of the 18th century, first as chorister and then as organist-choirmaster. Oh well. Too late to change the programming now.

And here’s the music for this coming Sunday:

I thought the Mendelssohn, which is the final chorus from the oratorio “Elijah,” was a little too “big” for a quartet (although I’ve been surprised in the past by what the 9:00 quartet has pulled off with aplomb!), so I shifted the choral numbers around a bit for the 9:00 service. So if you’re a Mendelssohn fan, come to 11:00! It’s a thrilling fugue.